The Wikimedia movement, or simply Wikimedia, is the global community of contributors to Wikimedia Foundation projects. The movement was created around Wikipedia's community, and has since expanded to the other Wikimedia projects, including the commons projects Wikimedia Commons and Wikidata, and volunteer software engineers and developers contributing to MediaWiki. These volunteers are supported by numerous organizations around the world, including the Wikimedia Foundation, related chapters, thematic organizations, and user groups.

The name "Wikimedia", a compound of wiki and media, was coined by American author Sheldon Rampton in a post to the English mailing list in March 2003,[1] three months after Wiktionary became the second wiki-based project hosted on Jimmy Wales' platform, and three months before the Wikimedia Foundation was announced and incorporated.[2][3] "Wikimedia" may also refer to the Wikimedia projects.

The Wikipedia community is the community of contributors of the online encyclopedia Wikipedia. It consists of editors (or contributors) and administrators, known as admins. The Arbitration Committee is a panel of editors responsible for conducting arbitration to resolve serious disputes between editors of the encyclopedia. The committee has the authority to impose binding sanctions, and also determines which users have access to special permissions. 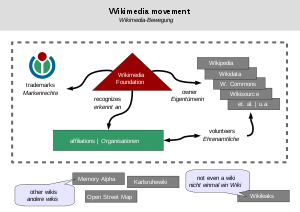 The Wikimedia movement, an overview

Mindmap of the Wikimedia movement (2019) 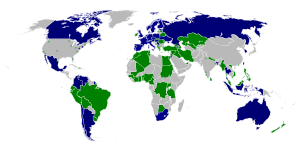 The Wikimedia Foundation (WMF) is an American non-profit[4] and charitable organization headquartered in San Francisco, California. It owns the domain names and operates most of the movement's websites, like Wikipedia, the online encyclopedia, as well as Wikimedia Commons.

The WMF was founded in 2003 by Jimmy Wales as a way to fund Wikipedia and its sister projects through non-profit means. Its purpose is "... to empower and engage people around the world to collect and develop educational content under a free license or in the public domain, and to disseminate it effectively and globally."[2][5][6]

According to the WMF's 2015 financial statements, in 2015 the WMF had a budget of US$72 million, spending US$52 million on its operation, and increasing its reserves to US$82 million.[7] WMF is primarily funded by donations with the average donation being $15.[8]

Wikimedia Deutschland (WMDE) is the largest chapter, with a total budget of €20 million[when?]. WMDE allocates approximately €1 million to support the corporation responsible for distributing donations, and €4 million for transfer to the WMF.[10][11]

To have the same procedure, every chapter follows the same process and requests its yearly budget at the funds dissemination committee. The foundation as internet domain owner of the project pages requests a share of the donations via the website in a country (e.g., for Germany, Switzerland), or pays a chapter the agreed amount (other chapters). A total of under 4 Mio USD is distributed via this way to chapters and thematic organizations.[12] The legal base is a "Chapters Agreement" with the foundation.[13]

Thematic organizations are founded to support Wikimedia projects in a subject focal area; there are currently[when?] two such organizations.[12][14] They are governed by the "Wikimedia Thematic Organization Agreement".[15]

User groups have less formal requirements than chapters and thematic organizations. They support and promote the Wikimedia projects locally or on a specific theme, topic, subject, or issue. Once they are recognized by the Affiliations Committee, they enter into a "User Groups Agreement and Code of Conduct" with the foundation.[citation needed] As of May 2019, there are 108 user groups.[16]