Trøndelag (Urban East Norwegian: [ˈtrœ̂ndəlɑːɡ])[3][4] (Southern Sami: Trööndelage) is a county in the central part of Norway. It was created in 1687, then named Trondhjem County (Norwegian: Trondhjems Amt); in 1804 the county was split into Nord-Trøndelag and Sør-Trøndelag by the King of Denmark-Norway, and the counties were reunited in 2018 after a vote of the two counties in 2016.[5][6]

Trøndelag county and the neighbouring Møre og Romsdal county together form what is known as Central Norway. A person from Trøndelag is called a trønder. The dialect spoken in the area, trøndersk, is characterized by dropping out most vowel endings; see apocope.

Trøndelag is one of the most fertile regions of Norway, with large agricultural output. The majority of the production ends up in the Norwegian cooperative system for meat and milk, but farm produce is a steadily growing business.

The Old Norse form of the name was Þrǿndalǫg. The first element is the genitive plural of þrǿndr which means "person from Trøndelag", while the second is lǫg (plural of lag which means "law; district/people with a common law" (compare Danelaw, Gulaþingslǫg and Njarðarlǫg). A parallel name for the same district was Þróndheimr which means "the homeland (heim) of the þrǿndr".[9] Þróndheimr may be older since the first element has a stem form without umlaut.

See also: the names of Trondheim, Trondheimsfjord, and Nidaros

People have lived in this region for thousands of years. In the early iron-age Trøndelag was divided into several petty kingdoms called fylki. The different fylki had a common law, and an early parliament or thing. It was called Frostating and was held at the Frosta-peninsula. By some this is regarded as the first real democracy.

In the time after Håkon Grjotgardsson (838-900), Trøndelag was ruled by the Jarl of Lade. Lade is located in the eastern part of Trondheim, bordering the Trondheimsfjord. The powerful Jarls of Lade continued to play a very significant political role in Norway up to 1030.

Jarls of Lade (Ladejarl) were: 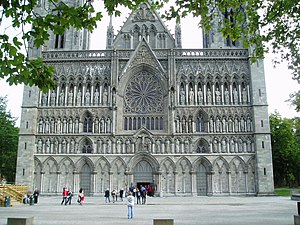 Trøndelag (together with parts of Møre og Romsdal) was briefly ceded in 1658 to Sweden in the Treaty of Roskilde and was ruled by king Charles X until it was returned to Denmark-Norway after the Treaty of Copenhagen in 1660. During that time, the Swedes conscripted 2,000 men in Trøndelag, forcing young boys down to 15 years of age to join the Swedish armies fighting against Poland and Brandenburg. Charles X feared the Trønders would rise against their Swedish occupiers, and thought it wise to keep a large part of the men away. Only about one third of the men ever returned to their homes; some of them were forced to settle in the then Swedish Duchy of Estonia, as the Swedes thought it would be easier to rule the Trønders there, utilising the ancient maxim of divide and rule.[12]

In the fall of 1718, during the Great Northern War, General Carl Gustaf Armfeldt was ordered by king Charles XII of Sweden to lead a Swedish army of 10,000 men into Trøndelag and take Trondheim. Because of his poor supply lines back to Sweden, Armfeldt's army had to live off the land, causing great suffering to the people of the region. Armfeldt's campaign failed: the defenders of Trondheim succeeded in repelling his siege. After Charles XII was killed in the siege of Fredriksten in Norway's southeast, Armfeldt was ordered back into Sweden. During the ensuing retreat, his 6,000 surviving threadbare and starving Caroleans were caught in a fierce blizzard. Thousands of Caroleans froze to death in the Norwegian mountains, and hundreds more were crippled for life.[13]

The county oversees the 41 upper secondary schools, including nine private schools. Six of the schools have more than 1000 students: four in Trondheim plus the Steinkjer Upper Secondary School and the Ole Vig Upper Secondary School in Stjørdalshalsen. The county has ten Folk high schools, with an eleventh folk high school being possibly being opened in Røros, with a possible start in 2019.[14]

The county is often sub-divided into several geographical regions:

There are nine towns/cities in Trøndelag, plus the "mining town" of Røros.

Along the coast in the southwest are the largest islands in Norway south of the Arctic Circle, including Hitra and Frøya. The broad and long Trondheimsfjord is a main feature, and the lowland surrounding the fjord are among the most important agricultural areas in Norway. In the far south is the mountain ranges Dovrefjell and Trollheimen, and in the southeast is highlands and mountain plateaus, and this is where Røros is situated. The highest mountain is the 1,985-metre (6,512 ft) tall Storskrymten, which is located in the county border between Møre og Romsdal, Innlandet and Trøndelag. North of the Trondheimsfjord is the large Fosen peninsula, where Ørland is at it's southwestern tip.Several valleys runs north or west to meet the fjord, with a river at it's centre, such as Meldal, Gauldal, Stjørdal, Verdal. Further north is the long Namdalen with the largest river, Namsen, and Namsos is situated where the river meets the Namsen fjord. The rivers are among the best salmon rivers in Europe, especially Namsen, Gaula and Orkla. On the nortwestern part of the region is the Vikna archipelago with almost 4,000 islands and islets.

Trøndelag is one of the regions in Norway with the largest climatic variation - from the oceanic climate with mild and wetter winters along the coast to the very cold winters in the southeast inland highlands, where Røros is the only place in southern and central Norway to have recorded −50 °C (−58 °F). Most of the lowland areas near the fjords have a humid continental climate (or oceanic if -3C is used as winter threshold), while the most oceanic areas along the coast have a temperate oceanic climate with all monthly means above 0 °C (32 °F). The inland valleys, hills and highlands below the treeline have a boreal climate with cold winters and shorter summers, but still with potential for warm summer temperatures. Above the treeline is alpine tundra.

There are 38 municipalities in Trøndelag.[17]

The region's official theatre is the Trøndelag Teater in Trondheim.[18] At Stiklestad in Verdal, the historical play called The Saint Olav Drama has been played each year since 1954. It depicts the last days of Saint Olaf.

Jazz on a very high level is frequently heard in Trondheim, due to the high-level jazz education in Trondheim. Trondheim is also the national centre of rock music; the popular music museum Rockheim opened there in 2010. Trøndelag is also known for its local variety of rock music, often performed in local dialect, called "trønderrock".

The region is popularly known for its moonshine homebrew, called heimbrent or heimert. Although officially prohibited, the art of producing as pure home-made spirits as possible still has a strong following in parts of Trøndelag. Traditionally the spirit is served mixed with coffee to create a drink called karsk. The strength of the coffee varies, often on a regional basis. The mixing proportions also depends on the strength of the spirit with more coffee being used for spirit with higher alcohol content. In southern regions, people tend to use strong filter coffee, while in the north they typically serve karsk with as weak coffee as possible.

Grey Troender sheep. A breed which originated in Trøndelag.

The "official dish" of the region is sodd which is made from diced sheep or beef meat and meatballs in boiled stock. The Norwegian Grey Troender sheep is an endangered breed of domesticated sheep that originated from Trøndelag in the late 19th century. There are currently approximately 50 individual animals remaining and efforts are being made to revive the breed.