Template:Short description Lua error in package.lua at line 80: module 'Module:Hatnote' not found. Script error: No such module "Unsubst". Template:Use dmy datesA portmanteau (Template:IPAc-en, Template:IPAc-en) or portmanteau word (from "portmanteau", a kind of luggage) is a blend of words[1] in which parts of multiple words are combined into a new word,[1][2][3] as in smog, coined by blending smoke and fog,[2][4] or motel, from motor and hotel.[5] In linguistics, a portmanteau is a single morph that is analyzed as representing two (or more) underlying morphemes.[6][7][8][9]

A portmanteau word is similar to a contraction, but contractions are formed from words that would otherwise appear together in sequence, such as do and not to make don't, whereas a portmanteau is formed by combining two or more existing words that all relate to a single concept. A portmanteau also differs from a compound, which does not involve the truncation of parts of the stems of the blended words. For instance, starfish is a compound, not a portmanteau, of star and fish, as it includes both words in full.

The word portmanteau was introduced in this sense by Lewis Carroll in the book Through the Looking-Glass (1871),[10] where Humpty Dumpty explains to Alice the coinage of unusual words used in "Jabberwocky".[11] Slithy means "slimy and lithe" and mimsy means "miserable and flimsy". Humpty Dumpty explains to Alice the practice of combining words in various ways: Template:Quote

In his introduction to The Hunting of the Snark, Carroll again uses portmanteau when discussing lexical selection:[11] Template:Quote

An occasional synonym for "portmanteau word" is frankenword, an autological word exemplifying the phenomenon it describes, blending "Frankenstein" and "word".[17] 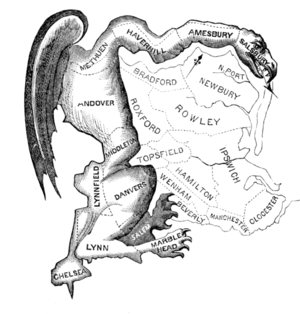 The original Gerrymander pictured in an 1812 cartoon. The word is a portmanteau of Massachusetts Governor Elbridge Gerry's name with salamander.

Many neologisms are examples of blends, but many blends have become part of the lexicon.[11] In Punch in 1896, the word brunch (breakfast + lunch) was introduced as a "portmanteau word."[18] In 1964, the newly independent African republic of Tanganyika and Zanzibar chose the portmanteau word Tanzania as its name. Similarly Eurasia is a portmanteau of Europe and Asia.

Some city names are portmanteaus of the border regions they straddle: Texarkana spreads across the Texas-Arkansas-Louisiana border, while Calexico and Mexicali are respectively the American and Mexican sides of a single conurbation. A scientific example is a liger, which is a cross between a male lion and a female tiger (a tigon is a similar cross in which the male is a tiger).

Jeoportmanteau! is a recurring category on the American television quiz show Jeopardy! The category's name is itself a portmanteau of the words Jeopardy and portmanteau. Responses in the category are portmanteaus constructed by fitting two words together.

Portmanteau words may be produced by joining together proper nouns with common nouns, such as "gerrymandering", which refers to the scheme of Massachusetts Governor Elbridge Gerry for politically contrived redistricting; the perimeter of one of the districts thereby created resembled a very curvy salamander in outline. The term gerrymander has itself contributed to portmanteau terms bjelkemander and playmander.

Oxbridge is a common portmanteau for the UK's two oldest universities, those of Oxford and Cambridge. In 2016, Britain's planned exit from the European Union became known as "Brexit".

Many portmanteau words receive some use but do not appear in all dictionaries. For example, a spork is an eating utensil that is a combination of a spoon and a fork, and a skort is an item of clothing that is part skirt, part shorts. On the other hand, turducken, a dish made by inserting a chicken into a duck, and the duck into a turkey, was added to the Oxford English Dictionary in 2010.

Similarly, the word refudiate was first used by Sarah Palin when she misspoke, conflating the words refute and repudiate. Though initially the word was a gaffe, it was recognized as the New Oxford American DictionaryTemplate:'s "Word of the Year" in 2010.[19]

The business lexicon is replete with newly formed portmanteau words like "permalance" (permanent freelance), "advertainment" (advertising as entertainment), "advertorial" (a blurred distinction between advertising and editorial), "infotainment" (information about entertainment or itself intended to entertain by its manner of presentation), and "infomercial" (informational commercial).

Company and product names may also use portmanteau words: examples include Timex (a portmanteau of Time [referring to Time magazine] and Kleenex),[20] Renault's Twingo (a combination of twist, swing and tango),[21] and Garmin (portmanteau of company founders' first names Gary Burrell and Min Kao).

Script error: No such module "main".

Two proper names can also be used in creating a portmanteau word in reference to the partnership between people, especially in cases where both persons are well-known, or sometimes to produce epithets such as "Billary" (referring to former United States president Bill Clinton and his wife, former United States Secretary of State Hillary Clinton). In this example of recent American political history, the purpose for blending is not so much to combine the meanings of the source words but "to suggest a resemblance of one named person to the other"; the effect is often derogatory, as linguist Benjamin Zimmer states.[22] By contrast, the public, including the media, use portmanteaus to refer to their favorite pairings as a way to "...giv[e] people an essence of who they are within the same name."[23] This is particularly seen in cases of fictional and real-life "supercouples". An early known example, Bennifer, referred to film stars Ben Affleck and Jennifer Lopez. Other examples include Brangelina (Brad Pitt and Angelina Jolie) and TomKat (Tom Cruise and Katie Holmes).[23] "Desilu Productions" was a Los Angeles, California-based company jointly owned by couple and actors Desi Arnaz and Lucille Ball. Miramax is the combination of the first names of the parents of the Weinstein brothers. On Wednesday, 28 June 2017, The New York Times crossword included the quip, "How I wish Natalie Portman dated Jacques Cousteau, so I could call them 'Portmanteau'".[24]

Holidays are another example, as in Thanksgivukkah, a portmanteau neologism given to the convergence of the American holiday of Thanksgiving and the first day of the Jewish holiday of Hanukkah on Thursday, 28 November 2013.[25][26] Chrismukkah is another pop-culture portmanteau neologism popularized by the TV drama The O.C., merging of the holidays of Christianity's Christmas and Judaism's Hanukkah.

In the Disney film Big Hero 6, the film is situated in a fictitious city called "San Fransokyo", which is a portmanteau of two real locations, San Francisco and Tokyo.[27]

The French linguistic term Script error: No such module "Lang"., literally a "suitcase-word", is a relatively recent back-translation from English, attested only since 1970.Template:Cn

Other blends include the following:

Sometimes the root of the second word is truncated, giving rise to a blend that resembles an acrostic:

A few portmanteaus are in use in modern Irish, for example:

There is a tradition of linguistic purism in Icelandic, and neologisms are frequently created from pre-existing words. For example, Tölva ("computer") is a portmanteau of tala ("digit; number") and völva ("oracle or seeress").[36]

Template:Refimprove-section In Indonesian, portmanteaus are often used as both formal and informal acronyms and referrals. Many organizations and government bodies use them for brevity. Journalists often create portmanteaus for particular historical moments. Examples include:

Script error: No such module "main". A very common type of portmanteau in Japanese forms one word from the beginnings of two others (that is, from two back-clippings).[38] The portion of each input word retained is usually two morae, which is tantamount to one kanji in most words written in kanji.

Some Anime titles also are portmanteaus, such as Hetalia (ヘタリア). It came from Hetare (ヘタレ), which means "idiot", and Itaria (イタリア) which means Italy. Another example is Servamp, which came from the English words Servant (サーヴァント) and Vampire (ヴァンパイア).

In Brazilian Portuguese, portmanteaus are usually slang, including:

In European Portuguese, portmanteaus are also used. Some of them include:

Template:Refimprove-section Although not very common in Spanish, portmanteaus are finding their way into the language mainly through marketing and media efforts, such as in Mexican Spanish 'cafebrería' from 'cafetería' (coffee shop) and 'librería' (bookstore), or Teletón from 'televisión' and 'maratón'. However, it is very frequent in commercial brands of any type (for instance, "chocolleta", from "chocolate" + "galleta", (cookie), and above all family-owned business (of small size, for instance: Rocar, from "Roberto" + "Carlos", and Mafer, from "Maria" + "Fernanda"). Such usages are prompted by the registering of a distinguishable trademark, but with time, commonly, a specific trademark became the name of the all similar products, like in Cola Cao, a name which is very common to use to refer any similar product.

A somewhat popular example in Spain is the word Gallifante,[49] a portmanteau of Gallo y Elefante (Cockerel and Elephant). It was the prize on the Spanish version of the children TV show Child's Play (Juego de niños) that ran on the public television channel La 1 of Televisión Española (TVE) from 1988 to 1992.[50]

In linguistics, a blend is an amalgamation or fusion of independent lexemes, while a portmanteau or portmanteau morph is a single morph that is analyzed as representing two (or more) underlying morphemes.[6] For example, in the Latin word animalis the ending -is is a portmanteau morph because it is used for two morphemes: the singular number and the genitive case. In English two separate morphs are used (of an animal). Other examples include French à le → au /o/, and de le → du /dy/.[6]

Script error: No such module "Portal".