Woodcut from 1493 depicting the burning of Jews in the 14th century. Today in the Jewish Museum of Switzerland's collection.[1]

The Nuremberg Chronicle is an illustrated encyclopedia consisting of world historical accounts, as well as accounts told through biblical paraphrase. Subjects include human history in relation to the bible, illustrated mythological creatures, and the histories of important Christian and secular cities from antiquity. Finished in 1493 after years in the making, it was originally written in Latin by Hartmann Schedel, and a German version was translated by Georg Alt. It is one of the best-documented early printed books—an incunabulum—and one of the first to successfully integrate illustrations and text.

Latin scholars refer to it as Liber Chronicarum (Book of Chronicles) as this phrase appears in the index introduction of the Latin edition. English-speakers have long referred to it as the Nuremberg Chronicle after the city in which it was published. German-speakers refer to it as Die Schedelsche Weltchronik (Schedel's World History) in honor of its author.

Two Nuremberg merchants, Sebald Schreyer (1446–1503) and his son-in-law, Sebastian Kammermeister (1446–1520), commissioned the Latin version of the chronicle. They also commissioned George Alt (1450–1510), a scribe at the Nuremberg treasury, to translate the work into German. Both Latin and German editions were printed by Anton Koberger, in Nuremberg.[2] Contracts were recorded by scribes, bound into volumes, and deposited in the Nuremberg City Archives.[3] The first contract from December, 1491, established the relationship between the illustrators and the patrons. The painters, Wolgemut and Pleydenwurff, were to provide the layout of the chronicle, to oversee the production of the woodcuts, and to guard the designs against piracy. The patrons agreed to advance 1000 gulden for paper, printing costs, and the distribution and sale of the book. A second contract, between the patrons and the printer, was executed in March 1492. It stipulated conditions for acquiring the paper and managing the printing. The blocks and the archetype were to be returned to the patrons once the printing was completed.[4]

The author of the text, Hartmann Schedel, was a medical doctor, humanist and book collector. He earned a doctorate in medicine in Padua in 1466, then settled in Nuremberg to practice medicine and collect books. According to an inventory done in 1498, Schedel's personal library contained 370 manuscripts and 670 printed books. The author used passages from the classical and medieval works in this collection to compose the text of Chronicle. He borrowed most frequently from another humanist chronicle, Supplementum Chronicarum, by Giacomo Filippo Foresti of Bergamo. It has been estimated that about 90% of the text is pieced together from works on humanities, science, philosophy, and theology, while about 10% of the chronicle is Schedel's original composition.[5]

Nuremberg was one of the largest cities in the Holy Roman Empire in the 1490s, with a population of between 45,000 and 50,000. Thirty-five patrician families composed the City Council. The Council controlled all aspects of printing and craft activities, including the size of each profession and the quality, quantity and type of goods produced. Although dominated by a conservative aristocracy, Nuremberg was a center of northern humanism. Anton Koberger, printer of the Nuremberg Chronicle, printed the first humanist book in Nuremberg in 1472. Sebald Shreyer, one of the patrons of the chronicle, commissioned paintings from classical mythology for the grand salon of his house. Hartmann Schedel, author of the chronicle, was an avid collector of both Italian Renaissance and German humanist works. Hieronymus Münzer, who assisted Schedel in writing the chronicle's chapter on geography, was among this group, as were Albrecht Dürer and Johann and Willibald Pirckheimer.[3] 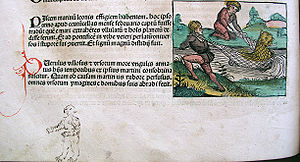 Catching a "lion fish" - a small illustration from a Latin copy. Note the red capital done in pen and ink, and the doodle in the margin below

The Chronicle was first published in Latin on July 12, 1493 in the city of Nuremberg. This was quickly followed by a German translation on December 23, 1493. An estimated 1400 to 1500 Latin and 700 to 1000 German copies were published. A document from 1509 records that 539 Latin versions and 60 German versions had not been sold. Approximately 400 Latin and 300 German copies survived into the twenty-first century.[6] They are scattered around the world in museums and collections. The larger illustrations were also sold separately as prints, often hand-colored in watercolor. Many copies of the book are colored, with varying degrees of skill; there were specialist shops for this. The coloring on some examples have been added much later, and some copies have been broken up for sale as decorative prints.

The publisher and printer was Anton Koberger, the godfather of Albrecht Dürer, who in the year of Dürer's birth in 1471 ceased goldsmithing to become a printer and publisher. He quickly became the most successful publisher in Germany, eventually owning 24 printing presses and having many offices in Germany and abroad, from Lyon to Buda.[7]

The Fifth day of creation

Script error: No such module "Labelled list hatnote". The chronicle is an illustrated world history, in which the contents are divided into seven ages: 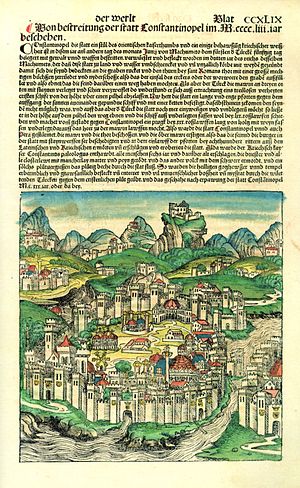 The large workshop of Michael Wolgemut, Nuremberg's leading artist in various media, provided the unprecedented 1,809 woodcut illustrations (before duplications are eliminated; see below). Sebastian Kammermeister and Sebald Schreyer financed the printing in a contract dated March 16, 1492, although preparations had been well under way for several years. Wolgemut and his stepson Wilhelm Pleydenwurff were first commissioned to provide the illustrations in 1487-88, and a further contract of December 29, 1491, commissioned manuscript layouts of the text and illustrations.

Albrecht Dürer was an apprentice with Wolgemut from 1486 to 1489, so may well have participated in designing some of the illustrations for the specialist craftsmen (called "formschneiders") who cut the blocks, onto which the design had been drawn, or a drawing glued. From 1490 to 1494 Dürer was traveling. A drawing by Wolgemut for the elaborate frontispiece, dated 1490, is in the British Museum. While some art experts may claim to be able to identify which Nuremberg Chronicle woodcuts may be attributed to Dürer, there is no consensus. Dürer was not yet using his monogram, and no artists in Wolgemut's studio signed their work in the Chronicle.

Illustrations depicted many never before illustrated major cities in Europe and the Near East.[8] 645 original woodcuts were used for the illustrations.[9] As with other books of the period, many of the woodcuts, showing towns, battles or kings were used more than once in the book, with just the text labels changed. The book is large at 18 inches by 12 inches. Only the city of Nuremberg is given a double-page illustration with no text measuring about 342 x 500mm.[7] The illustration for the city of Venice is adapted from a much larger woodcut of 1486 by Erhard Reuwich in the first illustrated printed travel book, the Sanctae Perigrinationes of 1486. This and other sources were used where possible; where no information was available a number of stock images were used and reused up to eleven times. The view of Florence was adapted from an engraving by Francesco Rosselli.[10] 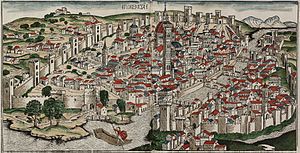 Due to the success and prestige of the Nuremberg Chronicle, which had one of the largest print-runs of an edition during the incunabula (also known as the incunable period of book production circa 1455-1500), one of the first large-scale pirated editions of the Chronicle appeared on the market. The culprit was Johann Schönsperger (c. 1455-1521), a printer working out of Augsburg who produced smaller editions of the Chronicle in 1496, 1497, and 1500 in German, Latin and a second edition also in German. It was the beginning of unauthorized book editions; pirated editions which capitalized on the success of another author and printer/publisher without consent.[11] Despite the pirating of a successful book, Schönsperger went bankrupt in 1507.

A page from a pirated edition of the Nuremberg Chronicle 1497